Book Review: The War of Art 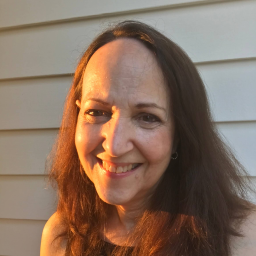 If you’ve ever experienced writer’s block, (whatever you define that to be for you), you’ve personally experienced the internal war of creating art. I read The War of Art: Break Through the Blocks and Win Your Inner Creative Battles by Steven Pressfield years after it was first published in 2002. The information is, however, timeless. It’s changed the way many people look at and understand the creative process.

It seems there are two camps when it comes to this book. You either hate it and think it’s hogwash. Or you recognize the struggle and welcome the definition of the enemy of creativity. You take up arms for the battle plan and rejoice in the victory.

I’m in the second camp.

Let’s take a look at The War of Art by Steven Pressfield in this article.

Short on time now–want to read later? Pin this image to come back later for a leisure read. 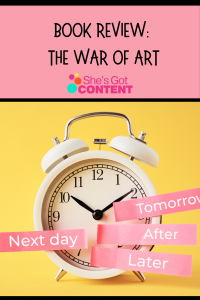 I became aware of Steven Pressfield, for his work of fiction, The Legend of Bagger Vance. I saw this as a movie first before I knew it existed as a novel. Pressfield has written a slew of other novels–many of them with war-based titles; Tides of War, The Virtues of War, Killing Rommel, The Afghan Campaign.

The fascinating thing to me is that Pressfield wrote for 17 years before he ever earned a penny for his written work.

Process that for a minute.

Before his career as an author took off, Pressfield worked 21 different jobs in 11 states, was homeless for a time living out of his car, and yet he continued to write. He believed in his dream.

It would be 27 years of writing before Pressfield actually sold his first novel–The Legend of Bagger Vance.

This man knows a thing or two about persistence.

After the success of The War of Art in 2002, Pressfield launched a successful series of books to help aspiring creators achieve their dreams, too. Some of these other titles are:

This first part of the book is all about that annoying, painful, persistent entity called Resistance.

Resistance, always with a capital R in the book, is that invisible, pervasive energy field that prevents us (or tries to) from doing any work-in-potential.

You’ve surely felt it. When you’ve longed to do something outside your comfort zone, it rears its head.

Maybe you’ve dreamed you would write a book or a blog, become an artist, start an entrepreneurial venture, or launch an online course. Any act that originates in our higher nature will elicit this force of Resistance.

Some may call this force, procrastination. Some may call it excuses, reasons, justifications, or even reality. Whatever you call this, get curious about what is really going on. Becoming aware of what’s happening is the first step to overcome it. Resistance can be pretty sneaky but you can flush it out by being aware.

In the second section of the book, Pressfield offers a roadmap to combat Resistance. The bottom line is to declare and become a Pro. The last section in the book is about moving higher above and beyond Resistance and doing the work as your gift to the world.

There is magic in getting started and overcoming Resistance. There is also magic in the momentum that kicks in when you keep going.

No one is immune to Resistance. The more you fear it, the more you feed it. Face that fear, become aware of what’s happening, and conquer it.

The greater the Resistance you’re experiencing, the great the importance of the work you’re avoiding.

It’s wise to keep in mind Emmett’s Law:  The dread of doing a task uses up more time and energy than doing the task itself.

Turn pro to combat Resistance–only you can claim the title of pro and the actions and behaviors that define the term.

Favorite Quotes From The Book

“Resistance is the most toxic force on the planet.”

“Rule of thumb: The more important a call or action is to our soul’s evolution, the more Resistance we will feel toward pursuing it.”

“I’m keenly aware of the Principle of Priority, which states (a) you must know the difference between what is urgent and what is important, and (b) you must do what’s important first.”

“Creative work is not a selfish act or bid for attention on the part of the actor. It’s a gift to the world and every being in it. Don’t cheat us of your contribution. Give us what you’ve got.”

I’ve already mentioned I’m in the ‘love it’ camp for this book. I recommend you read The War of Art. The book is short, the chapters quickly read and understood, and the concepts make sense to me because I’ve experienced it all.

If you’re a creative and you’ve felt this Resistance, read The War of Art. It will help you understand this powerful force and how you can successfully combat it. You are not lazy, crazy, or mad. What you’re feeling is Resistance–the enemy of change. Know, though, that this enemy can be defeated. Decide. Do it.

Keep in mind:  “Emmett’s Law:  The dread of doing a task uses up more time and energy than doing the task itself.”

The world is waiting for your gift–don’t make us wait a minute more. Please don’t cheat us of your divine contribution.

Have you read The War of Art? What are your thoughts if you’ve already read this book? If you’ve not yet discovered it, what was most compelling in this review that might make you want to put it on your list for a read very soon? Let me know in the comments.

This blog post may contain recommendations for products, services, and events. In some cases, the links provided are affiliate links. That means that if you click on the link and then buy a product at the site recommended, you won't pay a penny more and the author may earn compensation as a thank you. You can be assured that any of the promoted products have personally been used by or researched by the author for you and found to be high quality before being recommended.

Dr. Melissa Brown's career journey has always had an element of teaching. After retirement from clinical pediatric practice, Dr. Brown has taught and mentored as a healthy lifestyle coach, author, and speaker. She currently teaches solopreneurs and coaches how to stop being the world's best-kept secret. Her mission is to help you: Create great content. Impact people. Change the world.

Please log in again. The login page will open in a new tab. After logging in you can close it and return to this page.